So your toddler wants to run your baby over with his tricycle… how to protect your children from each other!

During a parent education evening last week, I rattled on about the importance of encouragement in parenting and shared my favorite slogan, “Children Do Better When They FEEL Better.” Then an arm shot up.

One of the parents, Sarah, looked sincerely puzzled and asked a simple question that got every head in the room nodding:

“Encouragement and Positive Discipline are great when it’s a low stakes situation, but what about when safety is involved? How should I respond to a threat of physical harm from one of my children to the other in a positive way?”

When I asked her to explain her situation, Sarah told the following story (which may be very familiar to anyone with children close in age and remembers, or is going through, the baby/toddler sibling combination):

It was the end of the day, about an hour before my husband got home… typically my roughest time. Gus (3) was zipping around the house on his tricycle when he headed straight for his little brother (6 months), stopping just a hair from Fisher’s little fingers.  I told him not to do that, that he could hurt Fisher and it didn’t feel safe to me.  A minute later, he did the exact same thing and I basically flipped my lid.  I yelled, “STOP,” stormed over to Gus, pried him from the tricycle, and let him cry on the ground as I put the trike outside.  I felt really protective of Fisher and that I needed to stop Gus. I felt awful for yelling and reacting in a physical way because he was so sad afterwards. But how else could I show him that I was in charge?

Sarah’s story highlights the primal nature of being a parent. We’re hard-wired to protect our children from a perceived threat, even if that threat is their sibling. Keeping your children safe is your first priority as a parent and if a quick intervention — sometimes ungraceful or inflated — is urgently needed to protect a baby or younger sibling from harm, you need to do that, and quickly.

But I encouraged Sarah (as I would any parent) to turn from the immediate danger to look for connection and encouragement with the older child instead of punishment. I know this sounds crazy and counter intuitive but here’s what Positive Discipline teaches us:

The most fundamental encouragement you can give your child is letting him or her know they’re significant even when things are not going well.

(Significance here means has value, has meaning, matters to you and to the broader community, etc.)

What does encouragement look like in this situation? How can Sarah communicate that Gus has significance?

Sarah could physically block the trike from Fisher’s path (as it does not appear that Gus intended to stop on his own) and take a deep breath (essential in such a case).

Rather than lifting him off the trike right away, she could gently and firmly lift just Gus’ hands off the handlebars, look into his eyes and say: 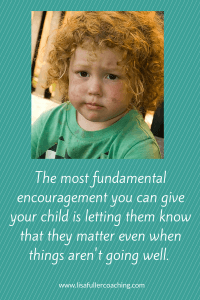 art is beating really fast because you really scared me by coming that close to Fisher’s hands. (Pause and breathe.)  I could use a hug right now – could you give me a hug? Let’s bring your brother in, I bet we could all use a hug to feel better.

If this feels impossibly warm and fuzzy in such a potentially dangerous situation, consider this story from Gus’ point of view.

Rather than feel punished and sad (as he clearly did when the trike was chucked outside and he was left crying), Gus might think, “I did something wrong that really scared my mommy. What I do has an impact. I’m important to mommy and I can even help her feel better.”

The most fundamental encouragement you can give your child is letting them know that they have significance, even when they’re misbehaving.

In this scenario, asking for a hug is encouraging – very different than offering a hug because you’re engaging your child in being part of the resolution in an active way.

CHILDREN DO BETTER WHEN THEY FEEL BETTER!  (we all do!)

Even when our children misbehave – if we can take steps to help them feel better, rather than making them feel worse, we are much more likely to encourage the kind of behavior we want to see from them in the future.

4 Steps for changing our response from punishment to encouragement:

For an example Sarah also shared a story of how she “felt a shift from the tricycle incident” just the day after my presentation. She wrote:

Gus was standing on his stool near the stove where I was getting ready to cook an egg.  He tossed the hot pad that was on the counter onto the hot pan.  I exclaimed surprise and got the pad out.  I told him that was really scary and we absolutely do not throw things on the pan. He didn’t seem to be doing it out of defiance, which probably helped my reaction just be scared and then clear. But it was like we were scared together, learned something, and then moved on. No tears, no drama…so much better. It just gave me a taste of what you were talking about.

For example, I have a son who leaves what I call anonymous messes quite regularly around the house. This is a common challenge that I’ve planned ahead for by deciding on a few ways to respond when I’m next faced with his mess. Just yesterday, I found what looked like spilled detergent on the floor near the washing machine, covered with pillow cases. I suspected he left this mess and rather than simply accuse him and rant AT him for not taking the time to clean up, when I saw him I’d calmly asked a few clarifying questions, had he been doing laundry (yes), did he know about a spill, (why yes he did — this fessing up is progress), what could he do about it now? (This is a challenge for me but staying calm and building cooperation — progress, not perfection — is a huge victory for me and the only way I can do it is by planning for it).

Regardless of the age of your child, encouragement through connection, in place of punishment is life changing — for both parent and child!

Please share in the comments below simple ways that you can remind your child of their significance (that they matter) today. In doing so, you’re giving us ideas that will encourage us to plan ahead – step 2 above! We’re all in this together 🙂

If you haven’t already done so, join me on this journey!