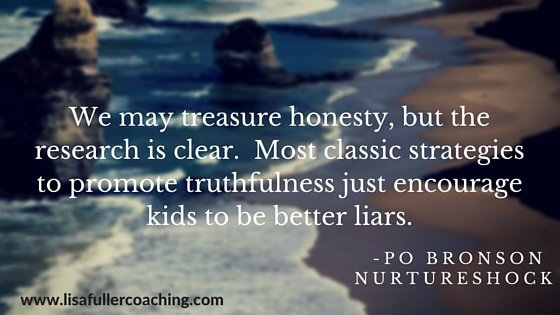 The topic of lying came up in my parenting class last week. We were role-playing parents’ typical responses to a lying kid:

“Honey, did you just lie about that? Are you sure?” (When parent already knows the child is lying)

“Are you kidding me? You just lied straight to my face. How COULD you?”

Everyone agreed that the typical responses above didn’t help the child learn to be honest, but they also wondered what the heck else to do!

Strangely, the very next night at bedtime, my own teen looked my husband straight in the eye and said he didn’t have his phone in his room (which is not allowed in our house.)

We scanned the downstairs charging area where the phones are supposed to “sleep” at night, and didn’t see the phone there. Or anywhere else. So I went back upstairs and knocked on my son’s door. He opened it and handed me his phone.

I had a really important conversation that I needed to finish and I knew that Dad would not let me finish it. I’m done now so here you go, he said.

I replied, You know, if you had explained that to Dad, maybe he would have let you finish your conversation.

No chance, my son replied.

Well, I said, you didn’t give him a chance. He might have. And even if he didn’t, was the lie worth the loss of trust and relationship?

Good night, Mom. Apparently, it was.

Good Night, C. We can talk more about this in the morning. I love you.

So what to do? How do we help our children to become honest, trustworthy, and develop integrity for doing the right thing?

“We may treasure honesty, but the research is clear.   Most classic strategies to promote truthfulness just encourage kids to be better liars.”   Po Bronson, Nurtureshock

Here are a few tips gathered from various experts on the subject.

As for my own situation with my teen, the next day I told him, “Dad and I really value trust. And we also recognize that you feel might feel trapped – you both want our trust and you want to be connected to your friends as school, especially when there’s a lot going on around Homecoming and homework and the PSAT. We understand that. We try hard to be reasonable people and when you’re feeling pressure to conceal the truth from us, we hope that you will let us know so that we can look for a win/win.”

Will he lie less in the future? I don’t know. I can’t make him be honest. All I can do is my best to create an environment and a relationship that makes honesty easier. And model it myself, of course.

I’ve decided to notice how often I lie today. Already caught one! (I can’t believe it! Dang!) More results later. ( ;